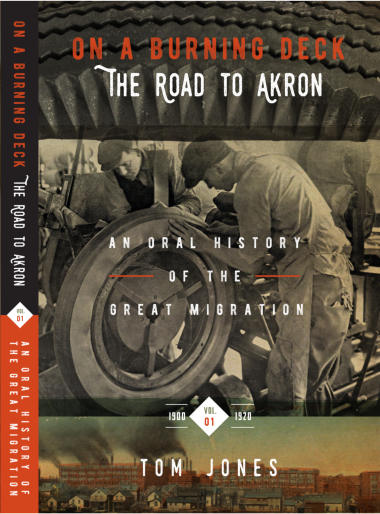 Situation:       Growing up, I was blessed with grandparents who were gifted storytellers with phenomenal memories. When I was in my early twenties, a relative suggested, “Someone needs to get a tape recorder.” A bell went off in my head, I purchased a tape recorder (one of several I would burn through) and began recording my grandparent’s oral history of growing up in Western Kentucky over 100 years ago and moving to Akron, Ohio when it was “The Rubber Capital of the World.”

Action:            For the next 13 years until their deaths, I recorded and transcribed their oral histories—over 40 hours worth. I then began supplementing those recordings with those of other relatives. Beginning in 2010, I began editing the conversations together and writing a narrative around them. In doing so, what had begun as a family history project took on a new, greater meaning. I discovered that historians knew absolutely nothing about the “hillbillies” who had made the move north during The Great Migration. I had the only record in the world. I named the two-volume history, On A Burning Deck, after a poem my grandfather had to memorize as a child that greatly paralleled their life stories.

As I had discovered that my book was completely unique and had great historical merit, I first approached different publishers and was offered book contracts from both academic and retail publishing houses. However, upon the advice of a literary attorney, I turned them down as too grasping. I chose instead to self-publish. Having investigated the process thoroughly through the prior publication of Waldo Maccabees, I designed the majority of the book (contracting out the cover design to a professional) and self-published both volumes of On A Burning Deck. They are available through Amazon, my literary website, and other retail outlets.

Result:            The books first received positive pre-publication reviews from a number of noted authors and academicians (see below). Then, the first book in the series was picked up by Publisher’s Weekly and positively reviewed—something that is almost unheard of for an independently produced book.  The work was then recognized by two online ‘zines affiliated with the Smithsonian Institution (“What It Means To Be An American” and Zocalo Public Square), which asked me to write an article based on what I had learned. I was subsequently asked to present my findings to the Jackson Purchase Historical Society in Western Kentucky.

“. . . a fascinating history of the Great Migration . . . this is not just a family tale. The Jones gang provides a peephole to the larger realities of the era, supplemented by Jones’ original reporting and extensive research of existing literature . . .”
Bob Dyer
Akron Beacon Journal

“. . . must reading for anyone who is interested in the social history of the Great Migration . . .”
Richard Troutman, Head Emeritus
History Department
Western Kentucky University

“. . . By the conclusion . . . a person will embrace the Jones as if they were kin . . . and the record of rubber in Akron is all the richer and more complete for it.”
Steve Love
Co-author, Wheels of Fortune: The Story of Rubber in Akron

“. . . Jones has done us a great service in publishing the transcripts of interviews he made with them in the 1980s and in contextualizing them in beautifully clear prose . . .”
John Tully
Author of The Devil’s Milk: A Social History of Rubber

“ . . . Jones puts their words in a rich context due to his extensive research in other sources and the literature. This is good history, but also a compelling story, well told.”
William H. Mulligan, Jr., PhD
Professor of History, Murray State University
President, Jackson Purchase Historical Society

“ . . . a must read for the many of us that dream of the return of American manufacturing. Furthermore, it is a very enjoyable read, which most history books lack. At the university level, it should be required reading for students of business and history.”
Quentin R. Skrabec, PhD
Professor of Manufacturing and Operations Management
University of Findlay
Author, Rubber An American Industrial History

“ . . . With this oral history, Tom Jones . . . shows what it was like inside the walls–from workers settling disputes with violence, to what went on in the days when worker health and safety wasn’t even a consideration.”
Bruce Meyer
Editor, Rubber & Plastics News
Author, “The Once and Future Union:
The Rise and Fall of the United Rubber Workers” 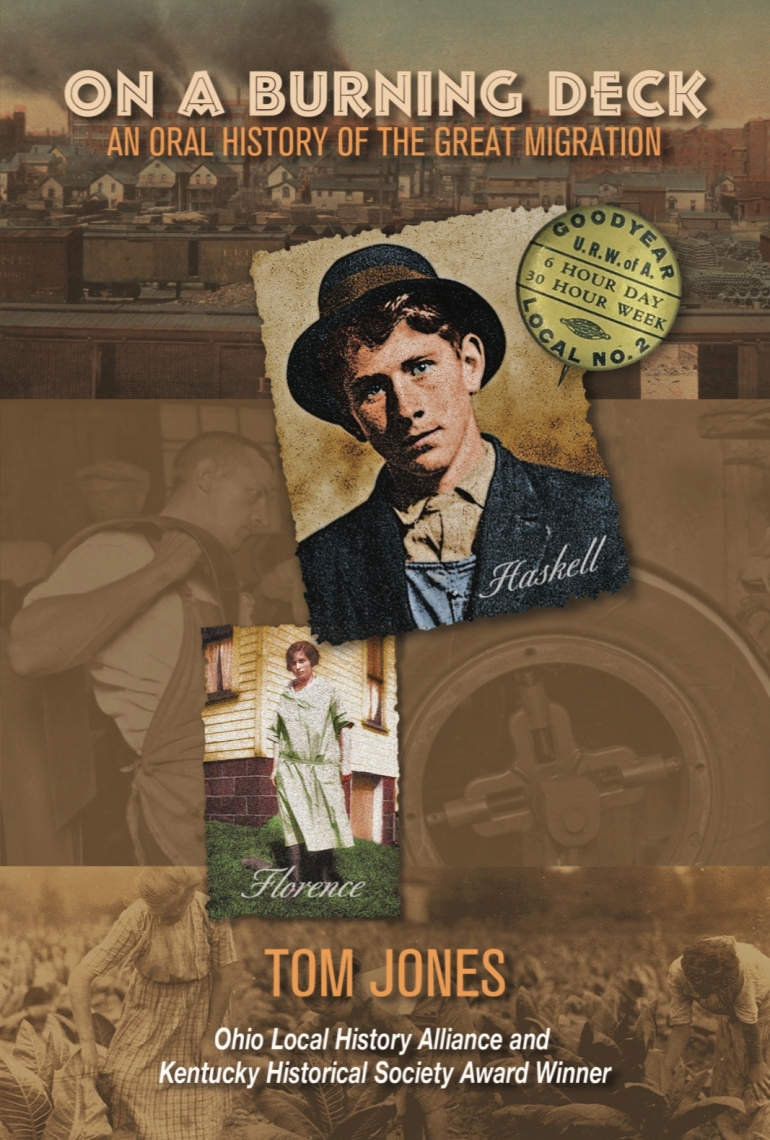 Following the publication of the award-winning paperback versions of On A Burning Deck, The Road to Akron and On A Burning Deck, Return to Akron, I combined them into one hardback volume—filled with previously unpublished photos and new information. Reviews agree that it is a tale well-told with humor and insight into the “hillbillies” who built industrial Ohio.

Based on over 50 hours of oral histories, as well as 173 rare photos from archives, museums and personal collections from around the country, On A Burning Deck is the only work to offer a complete portrait of one family’s origins in rural Kentucky, migration to Akron, Ohio, work in the rubber factories and eventual impact on local politics and government.

Meticulously researched, rich in detail, thoroughly referenced for historical perspective and completely indexed with hundreds of names, On A Burning Deck is a must-read for anyone interested in 20th-century history, Ohio or Kentucky history, industrial relations, local governance or genealogy.